The Herzl Center for Israel Studies, in cooperation with the Peace Research Center Prague, conducted a survey on public attitudes of Czechs towards Israel.

On Monday May 16, 2022, we will be presenting the results of the survey. The presentation will be followed by a discussion with prominent Czech diplomats on Czech positions towards Israel. 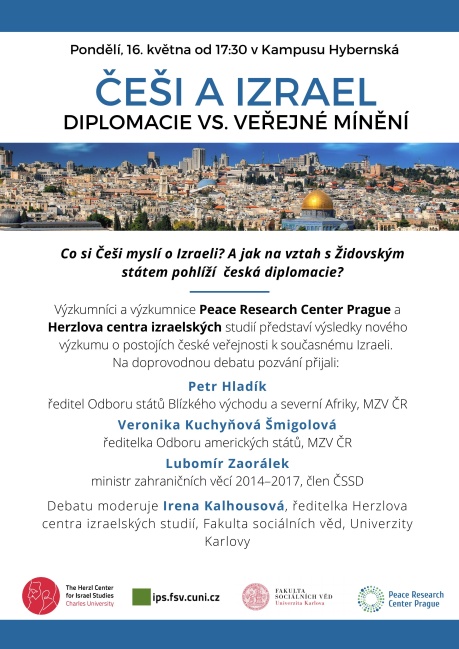 
Will the Abraham Accords change the Middle East? Will the Abraham Accords foster intense bilateral cooperation between Israel and Arab states? What made these agreements possible? Come for a debate with very special guests: H.E. Ambassador Anna Azari, Representative of the State of Israel to the Czech Republic, H.E. Ambassador Hanane Saadi, Maroccan Ambassador to the Czech Republic, Charles A. Kupchan, a senior fellow, Council on Foreign Relations, Washington D.C., USA. Moderator: Irena Kalhousova, Head of the Herzl Center for Israel Studies 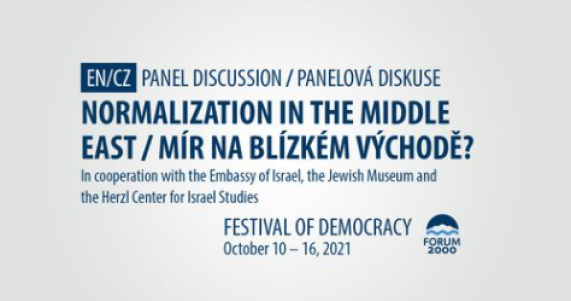 
The Herzl Center for Israel Studies invites you to a webinar on Israel's Society and Diplomacy at a Crossroad? Our guests are Yossi Klein Halevi, Senior Fellow at Shalom Hartman Institute in Jerusalem, and journalists Noa Landau and Anshel Pfeffer from Haaretz. We will discuss the impact of Covid-19 on Israeli society and Israeli relations with the US and the EU.

The webinar is co-organized with the Jagellonian University in Krakow. No registration needed. The discussion will be in English.


The recording is available here: 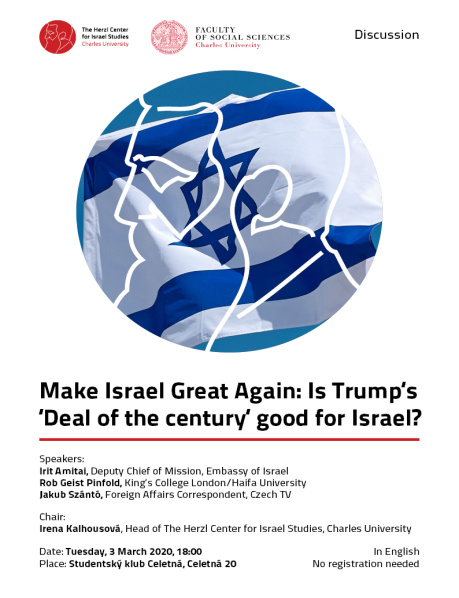 The Debate organized by the Institute for European Policy EUROPEUM


INVITATION: Café Evropa: Middle East and the EU – What is our role?


Come sit with us and discuss a topic that moves the EU. We kindly invite you to a debate titled "Middle East and the EU – What is our role?", which we co-organized in cooperation with the European Commission in the CR and the European Parliament Bureau. The discussion will take place on the 24th of February in Evropský dům (Jungmannova 24, Praha 1).

The debate will be hosted by Hospodářské noviny's journalist Ondřej Houska.


Herzl Center for Israel Studies at Charles University invites you for a discussion Humans of the Conflict: The Grassroots Struggle for Peace between Israelis and Palestinians.


In the time of the political stalemate, when important actors of the Israeli-Palestinian conflict do not pursue compromise and peace, can grassroots initiatives bring a change? Can civil organizations be more effective than politicians and diplomats in building bridges between Israelis and Palestinians? Ali Abu Awwad, a former Palestine Fatah activist who spent a few years in Israeli prisons became an advocate of non-violent resistance in Palestine through "Taghyeer" (change), the movement of which he is the founder. Jean-Marc Liling, an attorney who worked for the Israeli government and who specialises in issues pertaining to migration and asylum in Israel joined Ali in founding "Karama" (dignity). Together with many other local activists, they support activities encouraging a dialogue between the two communities, between Israelis and Palestinians, between Jews, Muslims and Christians.


In Prague, during the conference Festival of Democracy, they will discuss their vision for Israel and Palestine and their ideas about how Israelis and Palestinians could co-exist in peace and dignity. Moderated by Irena Kalhousová. Date: 15 October 2019. Place: Kino Ponrepo. No registration needed. The discussion will be in English. 
The Herzl Center for Israel studies cordially invites you for a public debate The Rise of Illiberalism: The Case of Israel. The basic pillars of democracy, among them independent courts and independent media, have become in many democratic states under the attack of democratically elected politicians. Nationalism and rights of a majority became accented at the expense of liberal values. In electoral campaigns, political opponents are depicted as a threat to the stability of a state. Israel is not immune to many of those trends. How robust is Israeli democracy? To what extent are illiberal tendencies in the USA and Europe similar or different to those in Israel? Can the growing focus on the Jewish character of Israel weaken the democratic character of the state? These topics and other issues will be discussed during the 23rd Forum2000 Conference by Rachel Azaria, a member of the Knesset (2015-2019) for Kulanu Party and Gadi Taub, a historian from the Hebrew University of Jerusalem and a political commentator. Moderated by Irena Kalhousová, Head of The Herzl Center for Israel Studies, Charles University. Date: 13 October 2019. Place: Maisel Synagogue, Maiselova 10, Praha 1. No registration needed. The discussion will be in English. 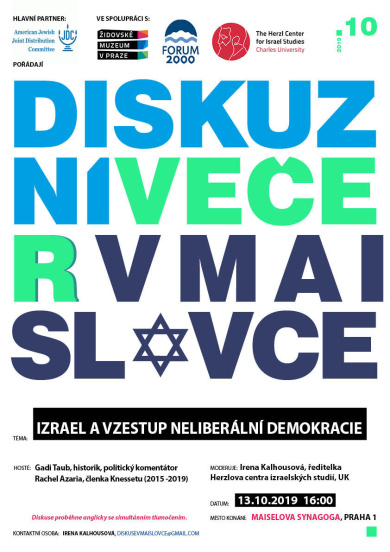 
An official opening ceremony of The Herzl Center for Israel Studies (HCIS) at Charles University took place on September 9, 2019. The event was held as a part of the 8th International Conference on Israel Studies “Democracy in Challenging Times: Israel, Europe and the World,” organized by the European Association of Israel Studies (EAIS). 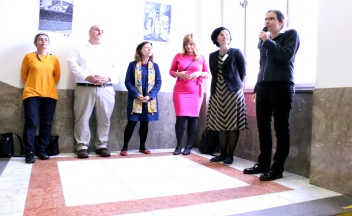 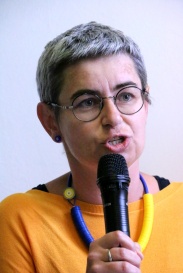 
The Faculty of Social Science, Charles University, issued a press release announcing the opening the The Herzl Center for Israel Studies.


You can read it here in English and here in Czech.